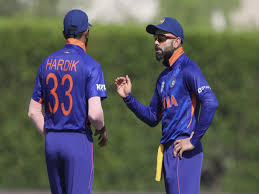 Virat Kohli-led Team India suffered a 8-wicket loss against New Zealand on Sunday (October 31) in their second T20 World Cup 2021 match & by this defeat the chances of Team India qualifying for semifinals are very difficult.

Newzealand won the toss and invited India to bat first. India made only 110-7 in 20 overs & the target was excelled easily by Kane Williamson’s led newzealand team in just 14.3 overs.

More about T20 World Cup 2021 India can still qualify for semifinals in spite of loss against New Zealand…..

It may be recalled that India had lost their first match against Pakistan by 10 wickets and the shockingly defeat against New Zealand has hugely troubled India’s chances of qualifying for the semifinals ICC Men’s T20 World Cup 2021.

Back to back loss put India into backfoot but three matches still remaining for india to play grab 6 points and then see what happen next , In cricket we never know .

India are placed with New Zealand, Pakistan, Afghanistan , Scotland, & Namibia in Group 2 and the top two teams from this group will reach the semifinals

How can India still qualify for the T20 World Cup 2021 semi-finals?

Even though Team India is presently sitting at the 2nd last spot in the group, Kohli’s side can still qualify for the semifinals. India will need to win their remaining three group games against Afghanistan, Namibia, and Scotland by huge margin. India will also require other results to go their way in order to reach the last 4 stage.

Kohli’s side first will need to defeat Afghanistan by a big margin in order to improve their net run rate.

If Scotland or even Nimibia can defeat newzealand and india win all their three remaining match with huge margin then india can still go to semifinals of t20 world cup. India want Newzealand and Afganistan both cannot get more than 6 points.

“Self Belief and Confidence will always earn you success.”